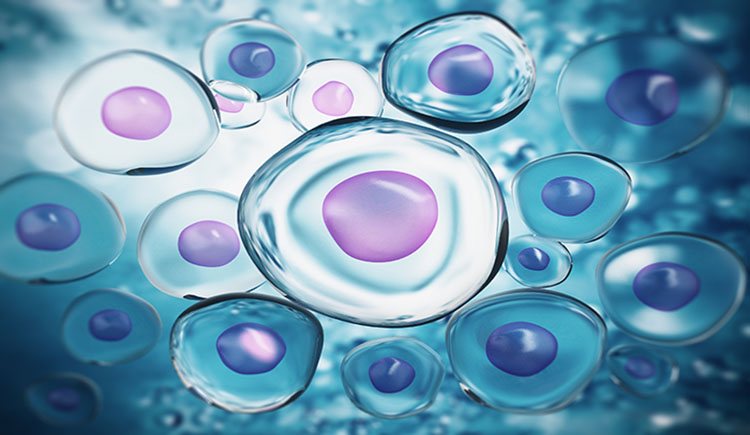 Remembrance of Things Past

In research that casts cells as curators of their own history, Harvard Medical School researchers at Dana-Farber Cancer Institute have discovered that adult tissues retain a memory, inscribed on their DNA, of the embryonic cells from which they arose.

The discovery led to one even more intriguing find—that the memory is fully retrievable information: under certain conditions, cells can play the story of their development in reverse to switch on genes that were active in the fetal state.

The findings, published online in the journal Molecular Cell, overturn the prevailing scientific assumption that adult tissues bear little trace of their embryonic origins. The discovery is especially relevant to the field of regenerative medicine, because it suggests that cells from patients may be coaxed into an earlier stage of development and then allowed to mature into adult tissues that can be used to replace diseased or failing organs. It also holds promise for cancer research, particularly on the ability of cancer cells to activate long-unused genes to help them spread throughout the body.

“We discovered that adult cells maintain a catalog of all of the genes in use early in development—a record of the stage in which organs and tissues are formed within the embryo,” said the senior author of the new study, Ramesh Shivdasani, HMS professor of medicine at Dana-Farber and Brigham and Women’s Hospital and a principal faculty member of the Harvard Stem Cell Institute. “Beyond the sheer existence of this archive, we were surprised to find that it doesn’t remain permanently locked away but can be accessed by cells under certain conditions. The implications of this discovery for how we think about cells’ capabilities, and for the future treatment of degenerative and other diseases, are potentially profound.”

The “embryonic memory” discovered by Shivdasani and his colleagues takes the form of molecules called methyl groups that bind to and detach from the DNA within cells. The placement of these methyl groups—which portion of DNA they bind to, and in what numbers—determines which genes are active and which are not. The arrangement of methyl groups in a given section of DNA is known as its methylation pattern.

In the new study, researchers focused on the methylation pattern of regions of DNA known as enhancers. Enhancers can be thought of as keys for switching genes on and off. To activate a gene, DNA forms a loop that brings an enhancer close to the coding portion of the gene—the section that contains the blueprint for making a protein. Then, along with other regions of DNA and specialized proteins, the genetic code embedded in DNA is converted into RNA.

Over the course of embryonic and fetal development, as cells evolve to take on the specific characteristics of the hundreds of types of adult tissues, cells “are constantly making choices about what kind of cell they will become,” Shivdasani explained. “This process, known as cell differentiation, involves cells flipping different genes on and off using different enhancers.” At each stage of development, particular sets of enhancers become active, much as individual sections of an orchestra play during different portions of a symphony.

By the time a child is fully formed, the set of active enhancers remains largely unchanged for the remainder of life; (although the liver, for example, becomes larger as a child grows, its identity as a liver is consistent). For the most part, enhancers that were used early in development but are now idle “look like they’ve been shut down,” Shivdasani said. “They don’t seem to have the features of activity.”

One of the distinguishing features of enhancers is that certain sections of them—where the C molecule of the genetic code is followed by the G molecule—are largely shorn of methyl groups, a state known as hypomethylation. This is true even of enhancers that have been shut down after their role in embryonic development ended. Scientists didn’t know, however, how extensively cells preserve this memory of their earliest incarnations and whether these memories can be accessed.

The results of the new study were illuminating on both counts. In intestinal cells from adult mice, Shivdasani and his colleagues found a nearly complete archive of enhancers that were active in the formative stages of intestinal development. Moreover, they found that in the absence of a protein called polycomb repressive complex 2 (PRC2), most of these mothballed enhancers returned to activity within two weeks’ time. (PRC2 is one of the major proteins used by cells to turn off specific genes.)

“We showed that adult cells not only retain a memory of the embryonic and fetal period but also that, under certain circumstances, this memory can be recovered,” Shivdasani remarked. “The archive is stored safely and can be recalled with remarkable specificity and accuracy.”

At this point, researchers can only speculate about why adult cells preserve these molecular memories. One possibility is that they are simply relics of an earlier stage of cells’ lineage—fossils of their course of development. Another is that cells may need to summon these memories—to bring them to life, in effect—in order to generate fresh tissue to repair damage.

“If the body needs to regenerate tissue that is damaged, it may be necessary for cells within that tissue to replay what happened in the embryo,” Shivdasani stated.

The findings may open a new chapter in regenerative medicine, as scientists explore whether cell memory can be harnessed to generate replacement tissue for organs that are damaged or diseased, the study authors said. Since such tissue would be derived from patients’ own cells, there would be no risk of rejection by the immune system.

The discovery may also hold promise for cancer treatment.

It’s thought that one of the ways cancer cells gain the ability to leave the original tumor and metastasize is by switching on genes that were active during fetal development but later became dormant. Knowing that cells keep a record of their once-active enhancers may suggest new targets for therapies aimed at halting or preventing cancer metastasis.